Embracing and Sharing God’s Grace is a game-changer. It will empower you to effectively and effortlessly lead people to Christ.

Wilma Watson has produced a free e-book and six videos. The course, ‘Embracing and Sharing God’s Grace’, is designed for both personal reflection and small groups.

The teaching will  lead God’s children on a game-changing journey to experience freedom from  obstacles (such as inner shame), that holds them back from pointing people to Jesus. The free tools given and using the Word of God to meet people’s felt needs are a significant shift in effectively leading people to Christ.

Wilma and her husband Bill’s success rate is very high.  They have helped hundreds become children of God, including over 70 ex-prisoners and addicts. Wilma’s daughter said to her recently, “Mum you should share your knowledge of how you so effortlessly get so many one-on-one saved.” So here it is, reaching people through meeting felt needs.

There are many today who are hurting and longing for answers. This is where we come in as Christ’s representatives! We can show them our Heavenly Father’s love and acceptance and have the joy of sharing His grace with them. Check these videos out!

Embracing God’s Grace has been designed for you to not only become free but to help others find freedom. Sharing God’s Grace will help you pray for and lead others to Jesus effortlessly.

Many have appreciated that they can access the teaching, so they can refer to it again and again. It also give suggestions on how best to use the course. 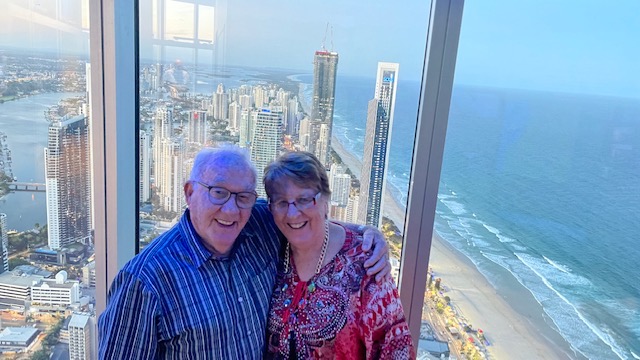 Who is Wilma Watson?

Wilma and her husband Bill, have been in ministry for more and half a century. Bill, being older and needing to slow down, has passed the baton onto Wilma to produce this material.

An unmistakable inner thought filled Wilma’s mind at the age of sixteen. God told her to do nurses’ training, two years of bible college and then she would get married and go to Ethiopia as a missionary. And that is what happened!

Meanwhile, Bill had been a single missionary in Ethiopia for five years. While he was praying, Father God assured him that He would give him a wife when he returned to Australia on leave.

On his way home, to save money, Bill stopped in Singapore and bought the engagement and wedding rings believing that God was faithful and would do what He said. Through a series of God ordained events, when Bill and Wilma met, they both were very sure of God’s plan for them.  The next time they caught up they were engaged!  Married three months later!

Upon arriving in Ethiopia in 1968, Bill and Wilma were assigned to an isolated, famine affected, unreached area in Dawra-Konta. Wilma was the only nurse! Bill was the teacher/church planter. He was fluent in the Amharic language and experienced in church work, having previously overseen 85 churches.

Initially, the Ethiopians in their area mostly worshipped satan and were 96% illiterate. God showed Bill in a vision of thousands coming to Christ. True to the vision, God’s miraculous power turned thousands, including many witchdoctors, from the powers of darkness to God’s marvellous Light. During their ten years there, before the communists forced them to leave, they witnessed many miracles! With trained national pastors, over 200 churches were established!  All glory to God!

Life back in Australia

Upon returning to Australia, Bill became the Australian Instructor for the “Change the World School of Prayer”. After several years in pastoral care work, Bill and Wilma became the Directors of Prayer Australia. Bill taught nationally, and internationally on prayer and spiritual warfare.  For the last nine years they have been the Directors of Gold Coast Healing Rooms.

Bill and Wilma have four children and seven beautiful grandchildren. Recently, their eldest daughter, Leanne, encouraged Wilma to write this manual. She said, “Mum, you should share with others how you effortlessly win so many to Christ.”

Wilma will show you in this course how God’s children can, through the power of the Holy Spirit, meet people’s needs and have the joy of effortlessly pointing them to Jesus!