Who are Angels? Are Angels real? Angels are powerful spiritual beings who serve God and us humans in different ways. Read my angel story and you will see why I believe they are real. I’ve said many times, “You’re an angel.” What I mean is, you have really helped me and I appreciate you.

Today we have angel mania. People are fascinated with ‘angels’. Perhaps we are longing for someone or something to relieve our pain and rescue us. I sure needed rescuing. This is my angel story…

My husband, Bill, and I arrived by small plane on a dirt remote airstrip in south-west Ethiopia. I was providing medical assistance, while Bill was involved in educating the people. Although we faced many challenges during our 15 years there, it was very rewarding.

One of those challenging times was when I needed medical help and the plane was not available to take me to the nearest doctor. We had to go overland instead! The problem was that there were no roads, only walking tracks.

As Bill had a motorbike before going to Ethiopia, one of the first things he did when we arrived was have a motorbike flown in. I believed him when he said he could use a bike on the walking tracks! What normally would take two and a half days by foot, to reach an American medical doctor, took us one and half by motor bike. Actually, for most of the first day I walked while Bill struggled to keep the bike upright!

Not long into our journey we discovered that due to the rain runoff from the mountain terrain, plus the heavy traffic of cattle and people, the sides of the trail were too narrow and deep for a bike. As Bill was continually stopping the bike to shovel his way through, I decided it was easier and quicker for me to walk.

After the doctor’s report though, Bill insisted that for my return, I not walk during the final stage over the steep, difficult mountain terrain.

Sensing that the bike could take longer on the difficult sections than the mule, Bill decided to go ahead, expecting me to catch up to him. The mule ride, however, took longer than anticipated. It was late in the afternoon and fearing the possibility of having to spend the night in an unknown Ethiopian hut, I decided to run the mule so I could get back before dark. Unfortunately, my Ethiopian escort was unwilling or unable to keep up with me, hence I rode alone.

Everyone, including animals, go into their huts after dark due to the hyenas. It was now dark and hyenas were beginning to circle around me. Alone along the way, I discovered that there were many walking tracks to choose from and now the foreboding fear of taking the wrong track and being lost gripped me.

I called out to God for help

Having prayed to God for help, immediately the mule came to a stop and refused to move forward (as the saying goes: “stubborn as a mule”). It was as if someone or something was standing in its way. I could see in the moonlight that there was definitely nothing there, so I released my hold on the reins and the mule turned itself around. It was as if the mule was being led! We traveled back along the track a distance and then the mule took a sharp turn onto another track. Could it have been an angel that led me and the mule home that night? I believe so! 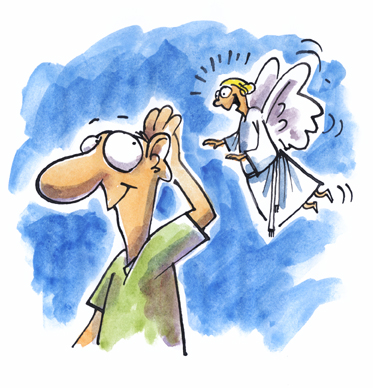 There are a few things I have learnt about angels. Although in the Bible we read of times where they have been given the ability to reveal themselves in the form of human bodies, in the book of Hebrews they are described as ‘spirits’. “What are the angels, then? They are spirits who serve God and are sent by him to help those who are to receive salvation.”

Angels were created by God to be his helpers

In God’s kingdom there are good angels. God is love, therefore his helpers are angels of love – they perform loving actions.

In Satan’s kingdom there are bad angels. The Bible says Satan robs, kills and destroys. He seeks to deceive us into believing that the bad angels are good for us! “Satan can disguise himself to look like an angel of light!” (2 Corinthians 11:14)

God loves you and wants to set you free.  Watch this short video to see how God protects you!